Opposition to Tahoe Resources’ Escobal mine

Tahoe Resources is a Canadian mining company headquartered in Reno, NV that has consistently undermined impacted communities’ right to consultation and consent, in order to impose the Escobal silver mine in San Rafael Las Flores in southeastern Guatemala. It has repeatedly misrepresented broad-based peaceful and lawful organizing against mining among indigenous and non-indigenous people in the region, defaming and delegitimizing them; thus putting human rights defenders at greater risk of repression and criminalization.

Tahoe Resources pressured the Guatemalan state to militarize the area in 2013 in order to push the project forward. Its presence has provoked violence, conflict and criminalization, including an armed attack by private security guards against peaceful protesters, which landed the company in British Columbia courts where a case is proceeding for negligence and battery.

Since Tahoe’s exploitation license was effectively halted in June 2017, first as a result of direct community action, and then by order of the court in July 2017, Tahoe has ramped up lobbying efforts in Canada and the U.S., urging both governments to take action on the company’s behalf.

Read the open letter signed by 54 organizations calling on the U.S. government to end support for Tahoe Resources and take action to protect human rights and environmental defenders. 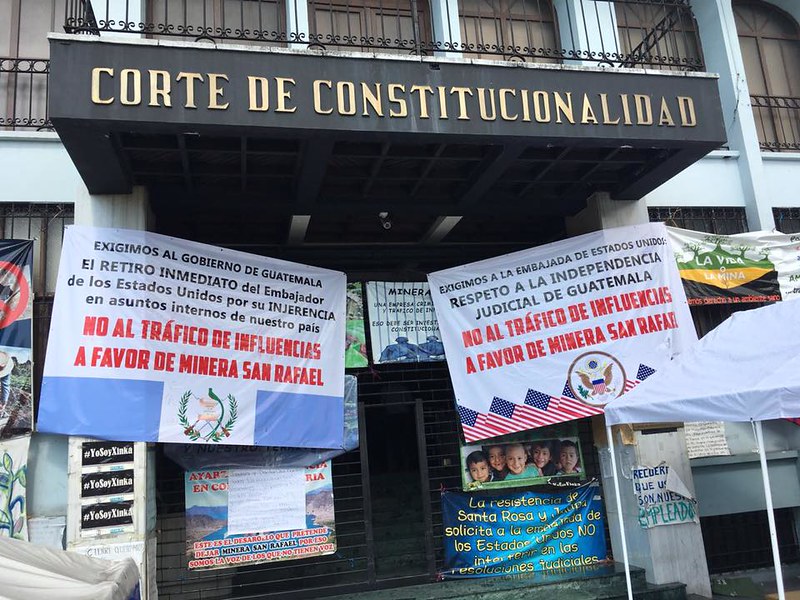 Despite well-documented cases of violence, criminalization, and lack of local support, the Canadian and U.S. Embassies in Guatemala have used their diplomatic influence to ensure that mining operations at Tahoe Resources’ Escobal project have moved forward, from the licensing and construction phase to the current legal battle before the Constitutional Court.

A report by the Washington-based Council on Hemispheric Affairs observes that, “The Canadian government actively assists the extractive industry without requiring that their mining companies respect the environment and human rights.” In the case of the Escobal project, at the height of criminalization, violence and militarization prior to the putting the mine into operation in April 2013, the Canadian Embassy participated as a guest of honour in the signing of a pact between the Guatemalan government and Tahoe to voluntarily raise royalty payments from 1 to 5%. The pact was aimed at legitimizing an unwanted project; five mayors in surrounding municipalities from the mine refuse to receive any benefits from these royalty payments.

Based on the Canadian lobby registry, after Tahoe Resources’ Escobal mine was suspended by the court in July 2017, we know that the company hired lobbyists to meet with at least fifteen Canadian elected and government officials between July 2017 and September 2017. Details about any responses from these or other Canadian officials have yet to be revealed publicly. The interventions of U.S. officials have been less discreet, as outlined below.

According to lobby expenditures registered with the U.S. Senate Office of Public Records, Tahoe paid a total of $270,000 to Nossaman LLP, Crowell & Moring LLP, Crowell & Moring International, LLC, and Brownstein Hyatt Farber Schreck, LLP to lobby on its behalf between July 2017 and April 2018. The firms’ lobbying reports include visits to the U.S. State Department, the U.S. House of Representatives and Senate, the White House, and U.S. Trade Representatives, as well as the office of Vice President Mike Pence.

July 2017: Tahoe contracts lobbyists in the U.S. for the first time. Nossaman LLP begins lobbying the State Department the U.S. Senate and the House of Representatives on behalf of Tahoe Resources.

August 23, 2017: Tahoe VP of Corporate Affairs, Edie Hofmeister, requests assistance from U.S. Ambassador to Guatemala, Todd Robinson, and seeks counsel on the actions the company could take to protect its interests in Guatemala. The letter lodges unsubstantiated accusations of “judicial impropriety” within the Constitutional Court.

August 24, 2017: Senator Heller writes to Secretary of State, Rex Tillerson, expressing support for the mine and requesting an update on what was being done to promote U.S. business interests in the region.

September 25, 2017: Tahoe CEO Ron Clayton, boasts of U.S. government intervention in Guatemala courts in support of the company during question and answer session at the Denver Gold Forum.  Clayton remarked that, upon Tahoe’s request, the U.S. government “had a big influence on even this last court decision,” referring to the Guatemalan Supreme Court ruling earlier in September, which temporarily reinstated the company’s operating license.

February 14, 2018: Nine members of the U.S. Congress write to Guatemalan President Jimmy Morales urging him to do more to improve the investment climate for U.S. business in the country citing Constitutional Court rulings that “create uncertainty for U.S. businesses considering investing in Guatemala.”

May 8, 2018: Don Wallace, Chairman of the Washington-based International Law Institute, submits an Amicus brief to the Constitutional Court, that warns of consequences, including international arbitration, if Tahoe’s license is not reinstated. The brief was presented by Guatemalan lawyers whose firm represents Minera San Rafael, Tahoe Resources’ wholly owned subsidiary.

May 16, 2018: Reno, NV based Kappes, Cassiday & Associates (KCA) notifies the Guatemalan government of its intent to sue Guatemala under CAFTA-DR for at least US$300 million. Before launching a suit, the company seeks negotiations with Guatemalan authorities to try to resolve its complaints over the 2016 suspension of its Tambor gold mine for lack of prior consultation with affected communities, the Ministry of Energy and Mine’s suspension of its export license and the alleged lack of state protection for the company up against community protests that it claims prevent it from further exploration work.

May 21, 2018: The U.S. Embassy in Guatemala releases a press statement in Spanish urging an immediate resolution from the Constitutional Court. See the English translation below.

“A stable climate of investment depends on a clear legal framework, respect for the rule of law and transparency in the application of law. These components are essential to develop Guatemala’s abundant natural resources, which boosts economic growth, the creation of jobs and the betterment of Guatemalans. Investments should adhere to legal requirements, including the respect of human rights  and local environmental laws and should also fulfill international agreements.

In this context, it is important that the Constitutional Court rules without delay on cases such as the Minera San Rafael case. The Government of the United States encourages all parties, relevant authorities and local communities to work together to achieve a transparent solution that will benefit everyone.”

June 21, 2018: 54 organizations send a letter to the U.S. ambassador in Guatemala calling for the Embassy to retract its statement on behalf of Tahoe Resources and take action to protect human rights and environmental defenders.

Prepared by: Earthworks, Guatemala Human Rights Commission (GHRC), MiningWatch Canada, and Network in Solidarity with the People of Guatemala (NISGUA)