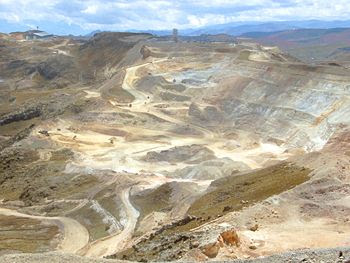 There’s big news from Peru this week: the Peruvian congress passed a new right to consultation law. Once signed into law by President Humala, who has staed his support of the law, this will require all mining and oil projects to acquire full consent from Indigenous communities that would be impacted by their projects. This puts Peru in compliance with the U.N. convention on Indigenous Peoples, which it signed in 1989.

This new law is timely and significant as mining companies push unprecedented investments towards extraction projects in Latin America.  Peru’s Energy & Mines Ministry has lined up over $41 billion in mining investments over the next 6 years. 10% of this investment is wrapped up in the newly approved Conga project of Newmont and Buenaventura, in northern Peru. This mining blitz is a worrisome trend in not only Peru, but across the Latin American region. In just the last 4 years, Colombia tripled its gold production and intends to double that in the coming years. In Ecuador, the last Andean country with no large-scale mining, President Correa plans to sell 10 major mining concessions in the coming months. This influx of mining investments could lead to unprecedented social conflicts if strong consultation laws are not passed and strictly enforced.

The Defensoria del Pueblo of Peru recently reported over 200 social conflicts in Peru, most of which are linked to extractive industry projects. Communities concerns about water pollution, human rights, and the ecological destruction that is often associated with mining projects has often fell on deaf ears. Peru’s new law demonstrates the country’s intention to quell many of these conflicts by giving communities the rights to determine what, if any, extractive operations are permitted in their areas.

It remains to be seen how this law will be implemented and how multinational corporations will adhere to a law they will surely view as an obstacle to unchecked mining operations in the resource-rich Andes region. Two of the major projects that may be tested, depending on the language of the new law, will be Newmont Mining’s Conga project, and the renewal of their attempt to mine the sacred Cerro Quilish mountain.

The Conga project, Peru’s largest ever mining investment, was recently financed for $4.8 billion by Newmont (51.35%), Buenaventura (43.65%), and the IFC(5%). The project is facing community resistance and reports of forced evictions (en espanol) are already surfacing.

The Cerro Quilish project is a project with a that has a long history of community opposition. When Newmont first sought to develop the project in 2004, they met with massive regional opposition. The opposition eventually forced Newmont to abandon their mining plans and commit to not mine the area. However, at this year’s Annual Meeting Newmont announced that they would not honor that promise and try once again to mine Cerro Quilish. Peru has a remarkable opportunity to ground-truth and implement the new consent law at Conga and Quilish, as well as other proposed mining projects.