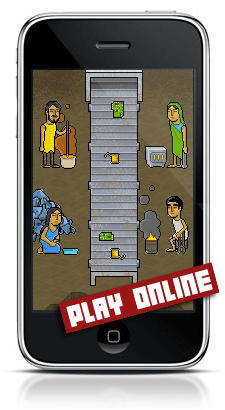 Why was this app different than the other 425,000 apps?
This app was a satirical game that allowed you to play through the entire supply chain of an iPhone.

Why did Apple ban this app?
Likely because it exposes the nastiest parts of what it takes to make our electronics.

The game starts in Democratic Republic of Congo (DRC). Here you are in charge of mining for coltan, a critical element in smart phones. The kicker is, that many coltan mines in the eastern DRC have horrific histories of child labor, military and rebel violence, human rights abuses, and disastrous environmental impacts.

The game’s point is to highlight all the above, and judging by Apple’s reaction it highlighted it well. Within hours of the game’s release Apple had banned the app and removed it from its store.

You don’t often think of human rights abuses when you are checking email or talking with mom on your smartphone. It’s obvious why Apple, or any other manufacturer for that matter, would rather you not think about these consequences, but the reality is that they exist. Right now, few smartphone manufacturers can tell you whether they are sourcing minerals from mines associated with poor labor standards, military oppression, human rights violations, or environmental degradation because supply chains are so poorly monitored. However, we’re beginning to see that it is possible to track these minerals.

Some encouraging steps are being taken to insure that minerals retailers rely on do not come with a legacy of human rights and environmental abuses. Provisions in the Dodd-Frank Act that require companies to state whether they are sourcing key minerals from conflict regions in the DRC is a great step towards supply chain transparency and corporate accountability. Though electronics, mining, auto, and other industries that rely on precious metals mining for products and profit must do more.

This “Phone Story” game does something that the electronics and mining industries often write off as impossible; mapping together a complete supply chain of the mineral in our electronics from the mine to retailers display cases. As long as this mentality of “impossibility” exists so does the uncertainty around the real costs of the phone you have up to your ear.

There is a better way to do this.

Initiatives like the No Dirty Gold Campaign’s “Golden Rules” are helping to break through these roadblocks. The rules, calling for greater accountability in mining, have gained the support of over 80 major jewelry retailers (Costco and Macy’s are the only two major retailers that have lagged behind in signing on). It’s clear that the retail sectors that rely on mined minerals and precious metals are taking notice. These companies have realized that their ambivalence leaves them complicit in the true cost of these metals. By signing on to these principles, calling for responsible mining, they are taking a concrete first step to pressure the mining industry for greater traceability.

There remains a long road ahead, but it’s not an “impossible” road.