Use in Oil and Gas Extraction

Acidizing usually occurs in aging wells that are in the final stages of production. It primarily uses hydrochloric and hydrofluoric acids at highly diluted concentrations, between 1 and 15%. The exact formula varies slightly by company, but is hidden from the public by trade secret laws.

Over the past few years, however, companies are finding that injections at higher concentrations dissolve oil bearing shale. Some believe that companies are using concentrations as high as 30% in California where the unique characteristics of the formation make acidizing economic and efficient.

Hydrofluoric acid (HF) can corrode glass, steel, and rock. In order to prevent it from dissolving the well casing, which is intended to keep oil and chemicals from contaminating the surrounding rock or water, companies mix it with other substances, many of which are used during standard fracking jobs. After the frack, the used acid, chemicals, oil, and any sediments, are pumped out in a process called backflush. The HF is often created on site by mixing hydrochloric acid and ammonium fluoride, and then immediately injecting it into a well.

While the Monterey has long been recognized as the primary source of oil produced in California, the exploited fields are found where the formation is naturally fractured, allowing for traditional vertical drilling. The US Energy Information Administration estimates there are as many as 15.4 billions barrels of shale oil, making the Monterey Shale the largest reserve of oil in the country, and one of the largest untapped sources in the world. Deposits lie anywhere between 6,000 to 15,000 feet below the surface, but can lie as deep at 30,000 feet in areas approaching Los Angeles. Because of its unique, fractured geology, drilling for shale oil using traditional methods and conventional hydraulic fracturing is not efficient. Instead, acidizing using HF cuts through the fractures to release oil and gas.

The Monterey Shale is a roughly 1,750 square mile formation running along California’s San Joaquin Valley southwards towards the Los Angeles basin. The Valley is a prime agricultural region, helping the state produce $43.5 billion in commodities in 2011, and helping provide nearly a third of all agricultural products for the United States.

Acidizing has been used for many years, though not at the scale proposed to develop the Monterey Shale. Other parts of the country, including Ohio, have seen the practice used as well.

California’s SB4, which passed in September 2013, will introduce the nation’s first regulations on acidizing. Companies will be required to obtain permits for every fracking and acidizing job, as well as disclose the water and chemical use. Landowners, adjacent property owners, and tenants will be notified before an acidizing job takes place, and there are strict groundwater monitoring requirements before and after acidization. Additionally, a plan for disposal of wastewater must be in place, whether it is to be re-injected into the ground, or treated on the surface.

This legislation, however, is not without its pitfalls and the law will not go into effect until January 1, 2015. Regulations on acidizing had also been proposed by the U.S. Bureau of Land Management as part of their fracking regulations, but have been dropped from the current proposed draft. No other state regulates acidizing.

An Accident Waiting to Happen

Currently, large amounts of Hydrofluoric acid (precise volumes are an industry secret) are routinely trucked around California and mixed at oilfields, traditionally at a concentration of about 9%. According to the Centers for Disease Control, HF is one of the most hazardous industrial chemicals in use. It is listed by the National Fire Protection Association in the most dangerous category of hazardous materials, and is recognized on the Superfund list as an “extremely hazardous substance.”

HF can cause severe burns to the skin and eyes, and can damage lungs in ways that are not immediately noticeable. If absorbed through the skin, even in minute amounts, and left untreated, it can cause death. HF is a liquid at low temperatures, but at 67.1°F, it turns into dense vapor cloud that hovers near the ground and does not dissipate.

A 2013 survey of 50 U.S. oil refineries by the United Steelworkers union found that “over a five-year period, the refineries in the study experienced 131 HF releases or near misses, and committed hundreds of violations of the OSHA rule regulating highly hazardous operations.”

There have been other leaks in the United States, though no other major catastrophes have occurred here. In September 2012, eight tons of HF gas burst from the Hube Global Chemical Plant, in Gumi, South Korea. Five workers were killed and at least 18 others were severely injured, including emergency personnel sent to treat the injured. At least 3,000 local villagers required medical treatment. 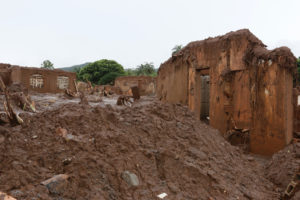